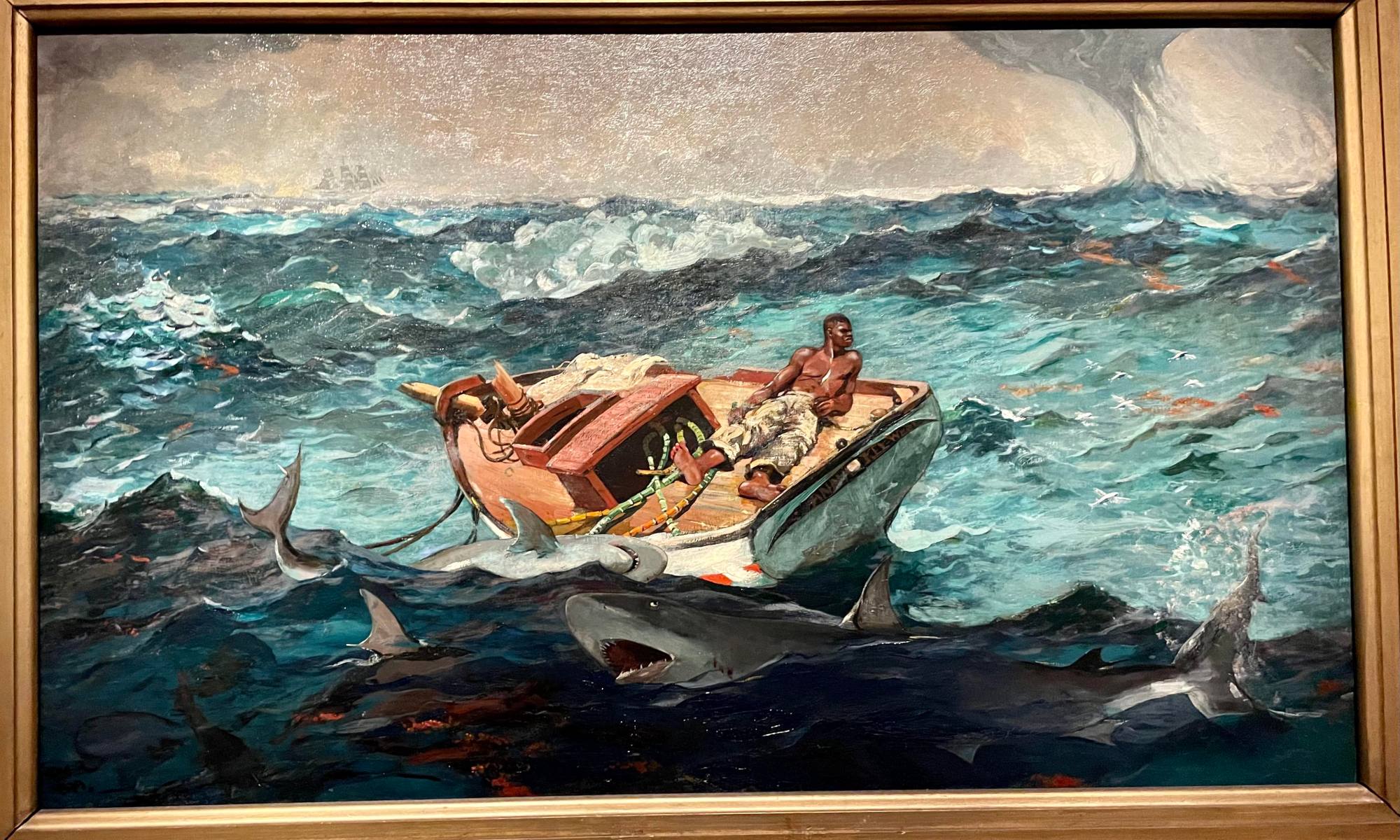 This past weekend my boyfriend Chappell and I went to NYC to hear music, visit friends, eat tasty food, and of course see art! Let’s explore some of the art I saw – much of it is inspiring to me and my current body of work. The theme that kept coming up was water: immersion into water, our relationship with water, the force of water as nature, and the spirituality of water.

First we went to the Metropolitan Museum of Art (the MET). There was a new Winslow Homer (b.1836 – d.1910) exhibition I wanted to see; my teacher told me he was an incredible watercolor painter. While there were watercolor paintings included, many of his pieces on show were oil paintings about water. Winslow Homer’s art sought to chronicle people’s lives both during historical events like the Civil War to everyday scenes of life. He also explored humanity’s relationship with nature, often with either overt or subtle socio/political/racial commentary.

Homer traveled from his home in Prouts Neck, Maine to tropical destinations like the Bahamas, Cuba, Florida, and Bermuda. The featured image above, The Gulf Stream (1899, reworked 1906), was one of the main inspirations for the show. It depicts a Black man on the deck of a distressed boat while sharks circle around him. The painting is a culmination of Homer’s personal and universal themes of man’s conflict with nature, and the geopolitical implications of the America’s imperial thirst. On the deck you see stacks of sugarcane – the Caribbean commodity central to the economy of the American and British empire. This crop coupled with the exploitation of black enslaved Africans and their descendants were linked by the currents of the Atlantic Ocean. This painting is an allegory for the human struggle against nature and greed.

As we wandered around the MET, I was struck by another scene of water: Man on a Diving Board (below left), 1912 by Aksel Waldemar Johanneson, Norwegian ( b. 1880- d. 1922). As the MET describes the work, “the scene is structured by powerful contrasts: the angular doubled-up form and taut musculature of the man, suspended in space, contrast sharply with the blurred contours of the woman in the water. The man’s face is hidden, leaving no clue to his expression as he gazes downward.” His contemporary Edvard Munch considered his works remarkable. I recently have also been playing with aerial photos of myself underwater (right). It’s curious to me how water both reflects and distorts light. In both Johanneson’s art and my photo, we are watching swimmers, and because the subjects’ faces are masked, we are naturally more curious about both of their experiences: Are they enjoying being under the water? What is it like under there? Who are they? How do I feel as I witness another swimming under water? Who am I? To me these questions and imagery connect with the non-dual and non-self nature of direct experience that I explore in my practice of Buddhist meditation.

Another artist that peeked my interest at the MET was Claude Monet’s La Grenouillere, 1869, oil on canvas (below left). During the summer of 1869 Monet and Renoir set up their easels at La Grenouiller, a boating and bathing resort on the Seine River outside of Paris. Monet said, “I do have a dream, a painting, the baths of La Grenouillere, for which I have made some bad sketches, but it is only a dream.” I particularly like the way he creates ripples of water. The color variations, texture, and broad, painterly strokes convey the dreaminess of water that intrigues and entices me to get lost in their color and shape. In my reference photo for a current artwork-in-process (below right), I want to accentuate the ripples of water to pull the viewer into the work and also convey a similar wavy, dreamlike, pleasant experience of submerging below the surface.

Later that evening, we went to the Avant Gardener, an outdoor music hall in Brooklyn to watch an Ajunadeep concert. Their music label is progressive house, progressive trance, electronic dance music; I really love the melodies, beats, and dreaminess of their music. Below is a 30 second video clip from the show. The color scheme of the lights, the overlapping projections of water, waves, and lasers, all combined to create this surreal and spiritual underwater effect. We had a great time!

We did see other artworks, eat pizza and ice cream, went shopping in an open air market, walked around central, etc. but there is one more artwork that that connects to similar meditations on water, immersion, spirituality, and the infinite. While at the Museum of Modern Art (MoMA) the work (below left) entitled Blue Monochrome, 1961 by Yvies Klien stood out. It is made of dry pigment in polyvinyl acetate on cotton over plywood and also encased in a glass frame. Apparently Klein, “declared the blue sky to be his first artwork and from there continued finding radical new ways to represent the infinite and immaterial in his works. One such strategy was monochrome abstraction – the use of one color over an entire canvas. Klein saw monochrome painting as an ‘open window to freedom, as the possibility of being immersed in the immeasurable existence of color.’ Although he used a range of color, his most iconic works often featured International Klein Blue, a shade of pure ultramarine that Klein claimed to have invented and trademarked.” I feel that I am also exploring non-duality, immateriality, immersion, and direct experience in my artworks and am inspired by how these themes frequently call to artists to explore in their various mediums. I don’t know if Klein did this intentionally to impact the surface of the work or it was done to simply preserve the artwork, but when folks take a picture of his work, there is a slight reflection of themselves in the image. If you look closely at the blue artwork, you can see the outline / silhouette of Chappell on the left and me on the right. I personally enjoy that you can see our forms, but the shapes are very subtle, and it’s almost impossible to see any detail. The viewer becomes implicated in the moment in viewing with just a slight reflection. My digital collage that is also part of my new series (below right) also deals with looking into the void and exploring the actual and symbolic surface texture of experience on both personal and literal universal levels. If I exhibit the collage in a glass encasement, there would also be a subtle reflection – something worth considering in terms of presentation!

Thank you for reading my reflections! I appreciate sharing this space with you as I continue to develop my artistic practice! Please feel welcomed to write a comment and/or your own reflection. ❤

Completed this Vows & Vision board while attending the Arts Every Day Arts Integration week of professional development. Such a powerful way to set intentions for the new school year!
Watercolor painting vegetables let’s go!! 😎🥰🧅🍅
NYC trip included lots of art 😍
Lemon and lime watercolor study 🍋 😋
Eggcellent watercolor studies for my Towson grad class 😎
On this day in 1956 the Baltimore city’s public pools open for the season, and for the first time on a non-segregated basis.